THE MURK OF AVALON 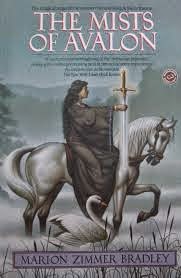 I'm usually a sucker for fiction about Arthurian Britain, particularly when they delve into the conflicts between pagan lore and Christian doctrine during that not-strictly-historical period. I'd heard nothing but good things about Marion Zimmer Bradley's 1982 novel, THE MISTS OF AVALON, and finally chose to crack this massive 800-page tome.

I knew before reading that MISTS was a feminist rendition of the Arthurian tradition, which emphasized the male agency of King Arthur and his knights, but did, in contrast to some comparable traditions of other cultures, allow for some agency on the part of female characters. The most famous of these are generally Guinevere, queen to Arthur and lover to Lancelot, and Morgan LeFay, sometimes represented as half-sister to Arthur, and the mother to Modred, the child of their mutual incestuous encounter. I also knew in advance that MISTS' focus was the character Morgaine, Bradley's take on the evil, magic-wielding sorceress LeFay. The traditional Morgan was not invariably associated with the magical isle of Avalon, but in MISTS Morgaine is not just a sorceress, but an iniatiate into the mysteries of matrifocal British paganism. Avalon, a domain perpetually shrouded in mists, is in some ways a perfect visual symbol for what some have called "the mystery of womanhood," at least as compared to the blunt, obvious preoccupations of the male gender-- few of whom, in Bradley's cosmos, are particularly sharp blades.

Unfortunately, Bradley reveals more than she conceals through having most of her characters chew the fat endlessly about who's sleeping with whom and whose parents brought about what psychological traumas. I have no objection to a latter-day author transporting some modern-day psychological observations into the matrix of Arthurian myth; indeed, as every writer is a child of his or her time, it's well nigh impossible not to do so. What I found egregious in Bradley's MISTS is the repetitiveness of many of her tropes regarding character makeup and ongoing plot-conflicts. This authorial inability to know when "less would be more" may have come about simply because during the majority of her career Bradley did not work in such lengths.

As I commented in my only other blog-comments on a Bradley book here, I've read twenty or more of Bradley's SF-fantasy works. She came to prominence in a period when almost the only publishing outlet for SF-fantasy was in the format of the paperback novel, usually not much beyond 100,000 words in length. I've rarely retained strong memories of those Bradley novels that I've read: whether written in the 1960s or the 1980s, I've found them to be efficiently plotted stories told in a simple "meat-and-potatoes" style. Obviously, given the strong popularity of her ongoing "Darkover" series and MISTS itself, it's possible that I'm simply not destined to be one of Bradley's bigger fans.

Nevertheless, even though MISTS by design is meant to be a long, generation-spanning work, the book's substance could have been boiled down to a more comfortable 500 pages without losing anything but repetitious character-and-plot tropes. Another culprit may be the fact that any author attempting to do a "big novel" on the Arthurian theme has a prodigious number of stories from which to choose. Naturally, Bradley gives preference to stories focused on the Morgan character, providing quasi-realistic takes on stories  like this one from Thomas Malory in which Morgan forces Arthur to fight a warrior named Accolon.  A minor consequence of this focus as that male-focused tropes, such as Arthur drawing the sword Excalibur from a stone or a tree, are substantially altered, and downplayed save when they are relevant to the novel's main conflict: the fading of the pagan and matrifocal way of life before that of all conquering Christianity.

I fully understand why Bradley chose to focus on the domestic world of women in her feminist re-writing of Arthurian themes. Although Arthur's Camelot did not exist as such in recorded history, Bradley must model her version of that world upon the medieval society of the time, with its extremely bifurcated gender-roles (though she does mention in passing that the older Celtic tribes harbored women who took up arms upon the battlefield). Yet for all the talk of rival religious traditions, Bradley's world is one in which both God and the gods are silent.  Any fans of Arthurian fantasy will find that the only magic in MISTS can be explained by the evocation of various psychic powers that have simply been interpreted as magic. Oh, and there's one "dragon," never seen "on-camera" as it were, but Bradley implies that it's nothing more than some prehistoric venom-spitting worm.

These rationalizations of mythic material are standard enough in what I tend to deem "bestseller fiction," and indeed Bradley's MISTS may have been successful with audiences precisely because it did not require those readers to believe in dragons and enchanted swords.  Still, bestseller fiction is capable of providing some philosophical discourse on certain topics, like what makes one religion different from one another. Bradley, no philosopher, placates possible Christian readers by having many of her pagans assure the Christians that "all gods are one." Yet clearly all religions are not one, given that so much of the novel is devoted to showing how feminine agency is reduced and downgraded with the encroachment of patrifocal Christian beliefs.  But I will admit that since most of Bradley's characters don't have the intellectual background conducive to long religious debates, such discourse would have been difficult to render credible.

Morgaine, the center of the novel, is fascinating in the novel's first half, as we see her caught in the machinations of the king-making pagan priests who plot to bring about the birth of Arthur. Yet while I admire the complexity with which Bradley lays out her vision of familial relations between dozens of Arthurian figures, some of them result in the aforementioned repetitiveness. As a young woman Morgaine falls in love with Lancelet (the novel's version of Lancelot), with the result that she and the novel's version of Guinevere are rivals for the knight's charms. This could have been a sound plot-idea, but Bradley returns to it again and again, rarely saying anything new beyond another chorus of Morgaine singing "Poor Poor Pitiful Me."

I'll note in conclusion that just as the Morgan-Arthur relationship is sometimes incestuous in certain stories, Bradley uses incest-motifs frequently throughout MISTS: for instance, Lancelet is Morgaine's cousin, the son of the woman who initiates Morgaine into the mysteries and who is more of a mother to Morgaine that the woman who births her.  In my other essay I commented that THE DOOR THROUGH SPACE is replete with such motifs, though only a more thorough reading of her corpus of works would reveal whether or not it's a repeated theme.