Here's my review of the 1997 DTV film THE CREEPS. Though a lot of imitations of the Universal monsters don't count as crossovers because they're ersatz versions of the originals, here the explanation is that the four fiends have been summoned into reality from the annals of fiction-- so they are supposed to be roughly coterminous with the original icons. 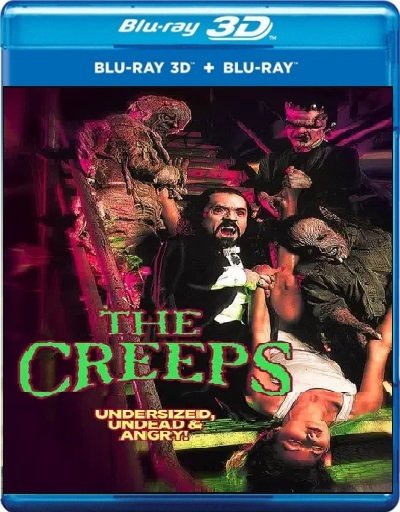 Posted by Gene Phillips at 4:49 PM No comments:

Jerry Siegel must have been feeling his oats on the supervillain crossover thing, for in SSK #9, the Kid and his partner Stripesy contend with three fiends-- Doctor Weerd, the Needle and another previous one-shot, Moonglow-- all of whom are being menaced by a fourth fiend, "the Chapter Killer." This time none of the evildoers get away. 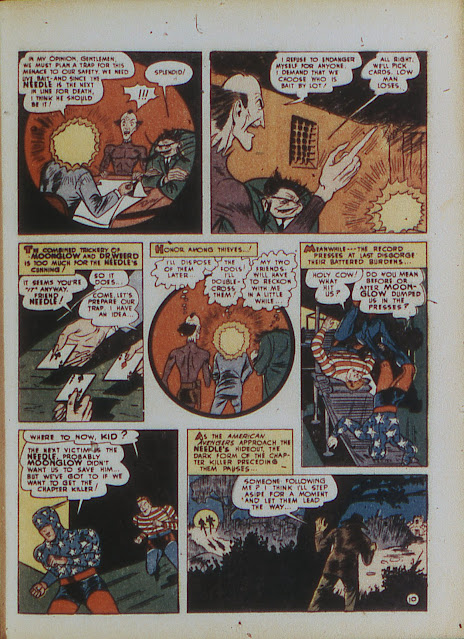 Posted by Gene Phillips at 1:01 PM No comments:

In STAR SPANGLED KID #7, Jerry Siegel and Hal Sherman created what may have been the first crossover of previously established villains in comic books, teaming up two foes of the Star Spangled Kid: Doctor Weerd and The Needle. Possibly the book's editor put a bug in the ear of the raconteurs working on the same title's TARANTULA strip, for in SSK #8 Manly Wade Wellman and Hal Sharp produced a story entitled "The Trio of Terror." In it three previous one-shot foes of the "spider-man" came together for crime and revenge: the Crime Candle, who killed victims with poison candles, a western-themed fellow named Bardon, and a crime-boss called The Sting. Tarantula bests them all pretty easily, so that the Trio's only distinction may be if they're the second crossover of "repeat offenders." 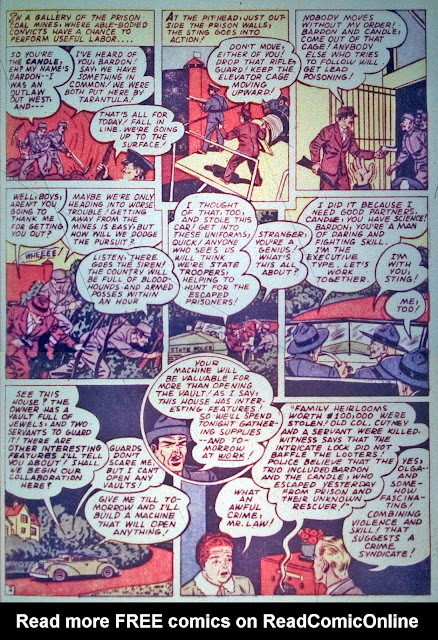 Posted by Gene Phillips at 12:52 PM No comments:

I've noted elsewhere that technically the first supervillain crossover in comic books is that of the Joker and Catwoman in BATMAN #2 (1940). Yet it's less than satisfying in that Catwoman isn't yet in full supervillain mode, but is just a shady lady with a fancy name, like the Dragon Lady in TERRY AND THE PIRATES. 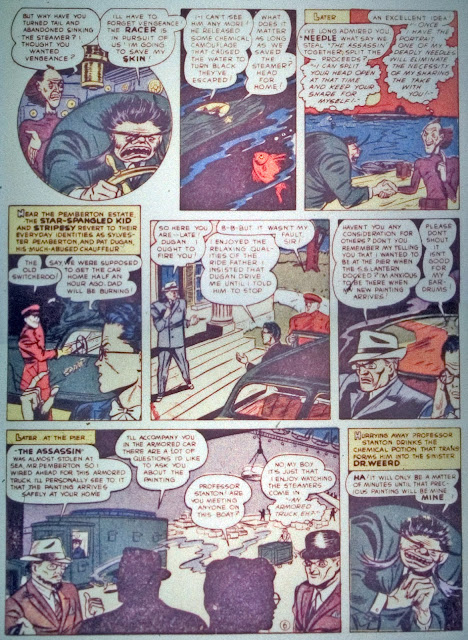 The first "full-blown" supervillain crossover seems to occur in STAR SPANGLED COMICS #7 (1942), wherein the heroic team of the Star-Spangled Kid and Stripesy contends with two villains who had appeared in previous stories, the Hyde-like Doctor Weerd and the pencil-thin Needle. Though the above page shows the two fiends planning to betray one another when it's expedient, they end up escaping together when foiled by the two heroes. There's also a third brand-new villain in the story, the Assassin, but I suspect he never appears again and so does not function even as a "proto-crossover."

Posted by Gene Phillips at 2:53 PM No comments:

In contrast to the first crossover of Warner Brothers' animation, 1933's THREE'S A CROWD, the company's last "living library" short, 1946's "Book Revue," depends mostly on puns of book titles, and only crosses over Daffy Duck with Red Riding Hood and her hungry opponent The Wolf. 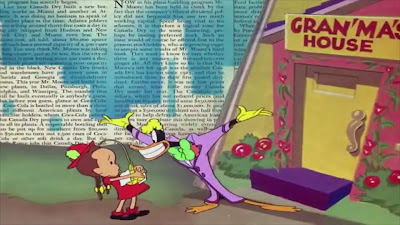 Posted by Gene Phillips at 6:03 PM No comments:

Presumably to better promote the "Fantasyland" section of Disney's theme park, MICKEY MOUSE IN FANTASYLAND (1957) crosses over some of Disney's best known animal-heroes with figures from stories steeped in magical fantasies. In one such tale, Mickey and Goofy take the air in a two-person flying machine and end up in Neverland, where they aid Peter Pan against Captain Hook. Tinkerbelle, the Indians, the mermaids and the Lost Boys all appear. 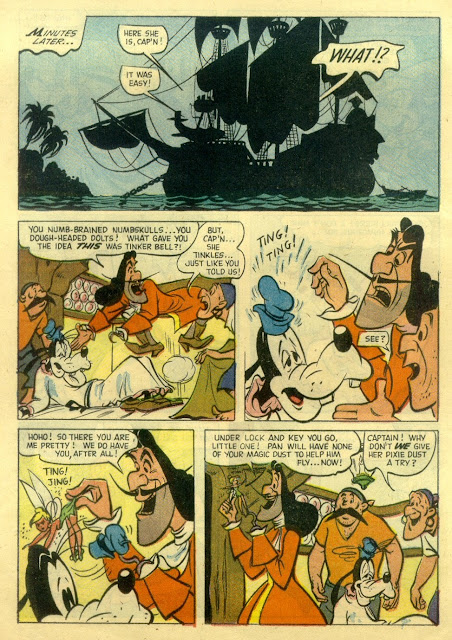 In the next story, Donald Duck goes into the fishing business with Pinocchio (still a puppet for whatever reason). The two fishermen rescue a castaway who informs them of a place to reap a harvest of "jolly berries," but the two sharpers from Pinoccio's film, the fox and the cat, horn in on the deal. For good measure, the fearsome cetacean Monstro also turns up but gets tamed by a dose of the berries. 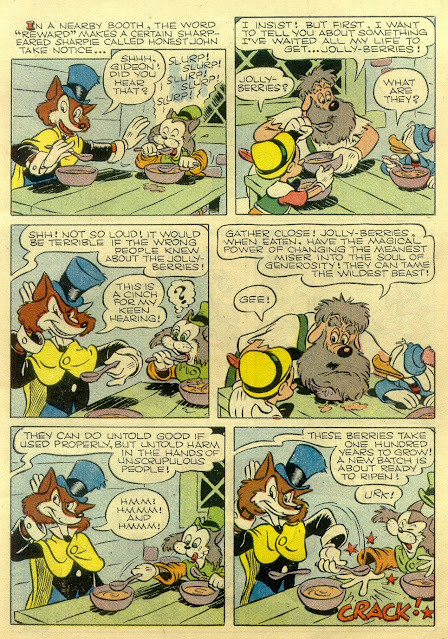 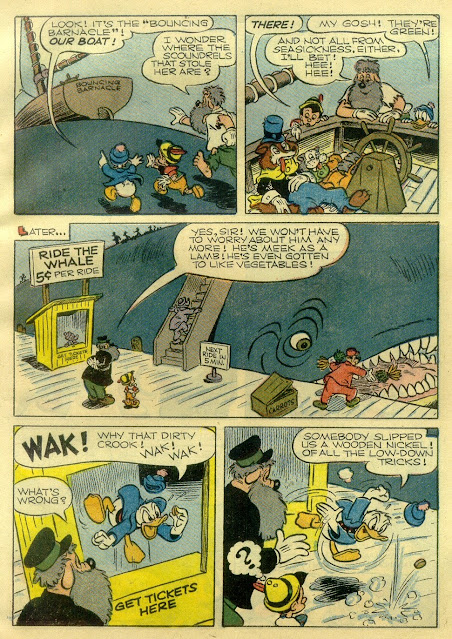 In an even more expansive crossover, Dumbo the Elephant flies Chip and Dale all the way to the cloud-domain of Willy the Giant from MICKEY AND THE BEANSTALK. 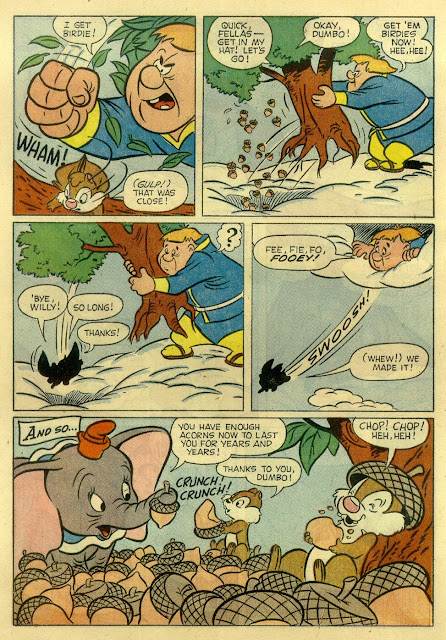 In an even more improbable crossover, Snow White and her dwarf-buddies want to get the (still living) Wicked Witch off their backs, so they hire Uncle Scrooge to lure her away from her evil plans with a cushy job. Oddly, Scrooge's hardheaded Scots realism limits the effect the Witch's magic has on him. 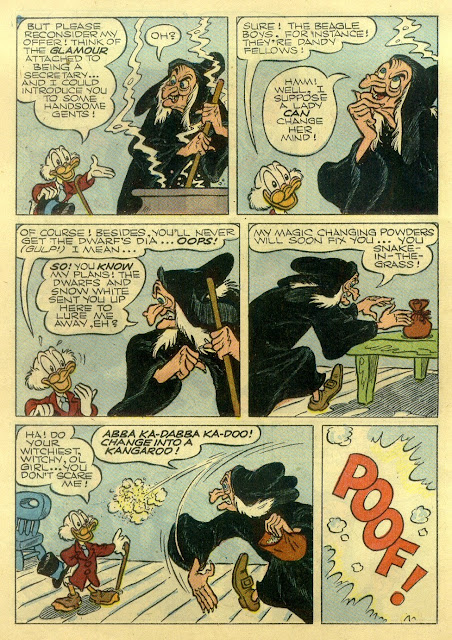 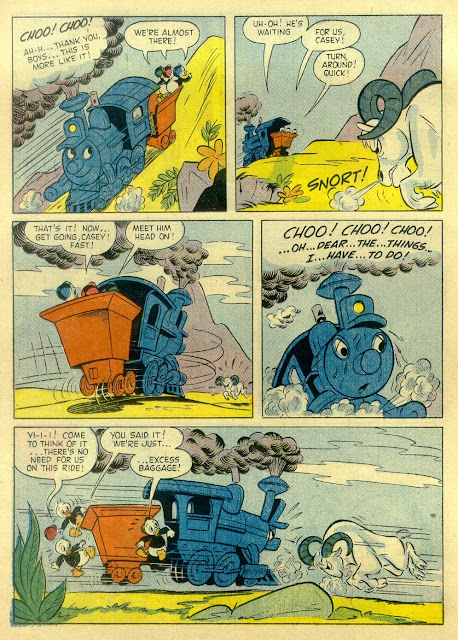 The final story is the only non-crossover, since all the characters are in the "Mickey Mouse" cosmos, with Mickey and Goofy in an Arthurian milieu, saving Princess Minnie from frequent Mickey-villain Black Pete. 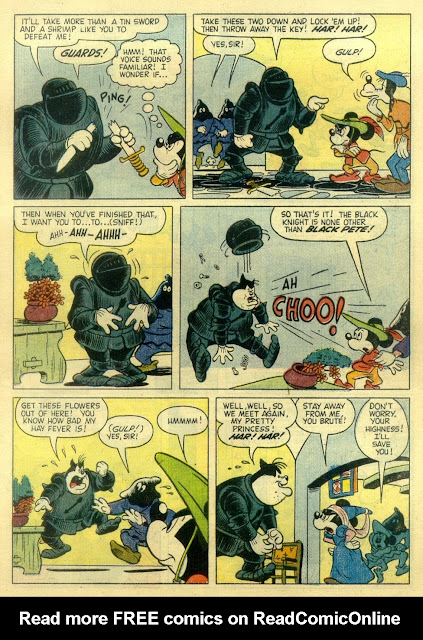 Posted by Gene Phillips at 5:58 PM No comments: 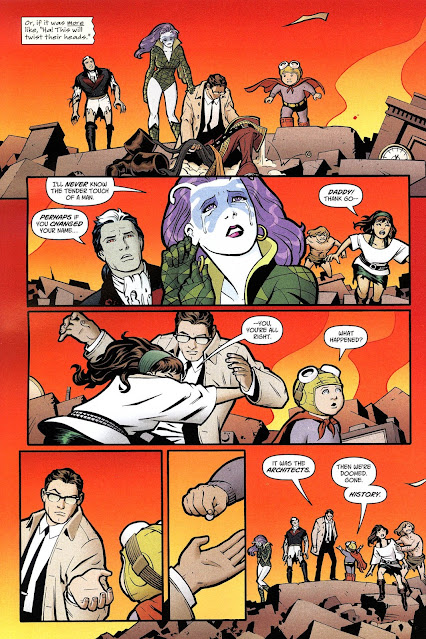 One of the more Morrison-esque outings in wild crossover matchups appears in the eight-part "Architects and Mortality" narrative in 2006's TALES OF THE UNEXPECTED. The main feature was a tedious revival of The Spectre, but the backup strip starred Doctor Thirteen, DC's resident skeptic of all things metaphenomenal. Writer Azzarello and artist Chiang then proceed to force the doctor and his daughter Traci (who conceals from him the fact that she can do magic) with a motley crew of odds-and-ends from DC history: Andrew "I, Vampire" Bennett, Anthro the cave-boy, Captain Fear (the ghost of a 17th-century Caribbean pirate), JEB Stuart and his Haunted Tank, a version of the Golden Age juvenile hero Genius Jones, and Infectious Lass, a toss-off concept who appeared in at least one Legion of Super-Heroes tale.

"Architects" boasts a few funny bits and nice art, but is not quite worth putting under the analyst's lens-- hence, its mention here.

Posted by Gene Phillips at 2:26 PM No comments: