I decided to reread Roger Zelazny's DAMNATION ALLEY prior to re-screening the film. It's a good basic action-opus, which takes place in a post-apocalyptic world following a nuclear strike. The hero-- whom some would call an antihero-- is enlisted to perform a dangerous task: Hell Tanner, an extraordinary good driver, is enjoined to drive from the "nation of California" across the perilous territory of Damnation Alley in order to take a vaccine to plague-ridden Boston.  He does so initially not out of any noble motives, but because he's been locked away for his commission of violent crimes, for which California authorities are prepared to pardon him, as long as he completes his task to their satisfaction. 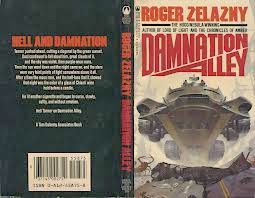 The plot of DAMNATION ALLEY boasts no innovations: Hell is sent on his task with other specialized cars from the authorities, cars that are supposed to keep watch on him and make sure he performs the task. Zelazny gets rid of the accompanying cars before the first third of the novel ends, and though one of Hell's guards ends up riding in the hero's car for a short time, he too gets unloaded fairly quickly.  None of the characters Hell meets along the way have any great impact on his life, any more than the menaces he fights off,  be they human raiders or mutant snake-monsters.  Zelazny's aim in minimizing plot-complications is to give his readers a character story of a hero who resists the standard notions of heroism.

Hell Tanner, in keeping with his exotic name, is supposed to be the last of the real-life motorcycle-riding club the Hell's Angels.  In the edition I read, the name is never used outright, probably to avoid copyright infringement.  He disdains authority and has committed a number of crimes, though one can't always be sure whether or not the authorities are veracious on all accounts.  The novel begins with Hell trying to flee the law to avoid his commitment, and he only goes through with it because the law-enforcers stick with him for the first few miles.  However, Zelazny isn't simply glorifying the type of antihero that became fashionable in the 1960s.  Although Hell is a son of a bitch, he begins to have a very unsentimental appreciation for the magnitude of his task, perhaps showing some influence from Greg, the one driver who ends up sticking with him for a while. While Greg sleeps and Hell drives, Hell thinks:

Nobody had ever asked him to do anything important before, and he hoped that nobody ever would again. Now, though, he was taken by the feeling that he could do it. He wanted to do it. Damnation Alley lay all about him, burning, fuming, shaking, and if he could not run it, then half the world would die, and the chances would be doubled that one day all the world would be part of the Alley.


Hell Tanner may not be a standard heroic type, but these are not the motivations of an antihero; he's just a very nasty, selfish hero.  Without giving away too much, Hell succeeds in his quest, but still manages to give society the middle finger.

The novel is a good quick read, but beyond the unusual take on a SF-hero, there's not much to recommend it. Zelazny occasionally cuts away from Hell's journey to show the suffering people in Boston, and I suspect these sections were added just to expand the original novella to novel-length. I for one skipped them and felt that I missed nothing.